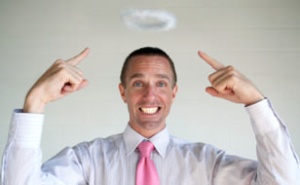 It was probably the most formative piece of feedback to a sermon I have ever received.

I don’t remember what I had preached on, but I know I thought it was pretty average, and I wasn’t happy with it.  Straight afterwards a friend came up to me and asked me how I thought it had gone.

I muttered something vaguely dismissive of what I had done, but then he brought me up short. Richard pointed a finger at my chest, looked straight into my eyes, and said,

“You taught me something about Jesus I didn’t know before. How dare you say it wasn’t any good!”

That brought me up short.  I realised I hadn’t thought of it that way before, and I needed to think carefully about how I handle conversations after church.

What I think and feel about my sermon are irrelevant. The whole point of the exercise is the response to the gospel in the hearers.

After I have preached I normally feel pretty empty. There are spiritual, physiological and psychological reasons for that, but I’ve learnt that’s what happens.  Adrenalin seeps away, I’ve travelled a spiritual journey while I’ve been preaching, and I’ve used a lot of energy in the effort of engaging with and communicating to a bunch of people.  No wonder I feel slightly deflated.

And I now routinely dismiss questions asking about my emotional state, even in a more structured feedback session, because provided it is within a range of what I’ve learnt is normal, it is no guide at all to what the Holy Spirit has been doing in the lives of the hearers as his Word has been opened.

I owe it to people who have just heard the sermon not to bring my feelings to the table.  Instead, I need to see the conversations I’m about to have as a continuation of what’s just gone on.

“I always feel a bit flat after I’ve preached, but I’ve learnt that doesn’t  matter.  How did it come across to you?”  That’s keeping it at the level of feedback on the sermon, but shifts it onto what he learnt rather than how I felt

Or, after he’d poked me in the chest:

“Richard, that’s brilliant! What did you learn?” Again, the focus shifts from me to him, and what he’s discovered about Jesus.

Again, deflect.  Not onto false modesty, but onto God, quickly:

“Thank you – it’s easy being excited about such a wonderful passage! Was there something that struck you particularly?”

There are a host of other things people want so say, and where we need to work out what to say back.  But there’s a horrid streak in me I have to nail each time.

Pride is a terrible enemy for all preachers.  Pride can tell us we’ve done really well, or that we’ve just preached really badly compared to what we’re really capable of.  Pride seeks praise, and massages conversations so we get compliments. Pride can make us take pride in what is nothing more than God’s gift, which he could equally bestow on any member of the church, but which he happens to have given to us. Pride makes us take pride in being humble. Pride makes us focus on our performance, our impact, and how my sermon is really about me.

Nonsense.  Do your soul work before you preach, and get yourself ready.  Reset your dials after you’ve preached, during the closing song. And at the most basic level,  I find I’m often helped by eating a banana, to reset the energy levels.

If God’s word is having an effect through you, you must expect to have to handle those conversations.  So plan how.

Thanks for reading this far, folks. Pile in below and let’s help each other out!