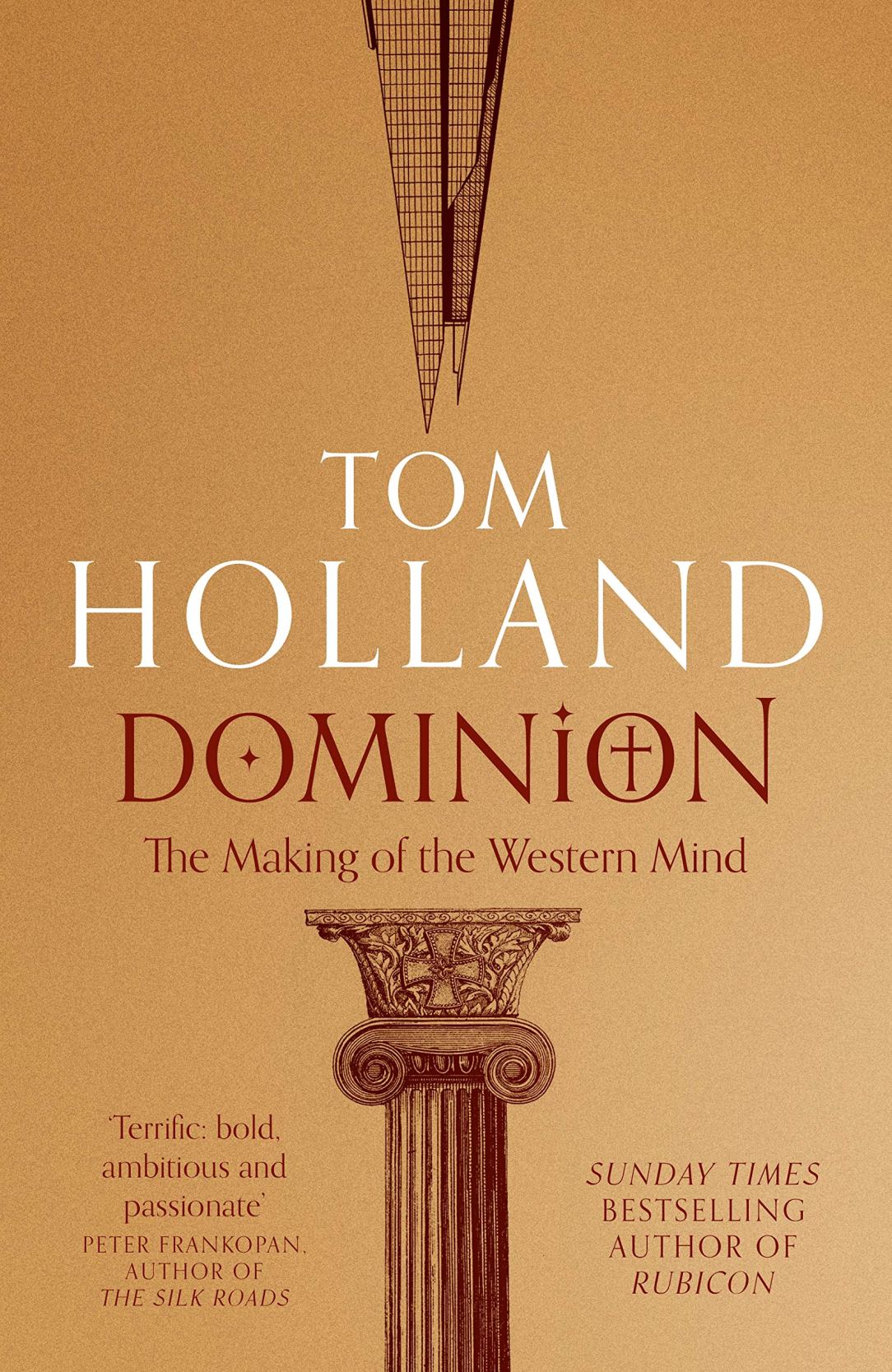 Tom Holland is a phenomenon. His output covers ancient Greece and Rome, Anglo-Saxon England, and a wonderful, gossipy translation of Herodotus.  More importantly (arguably, even more important than Dominion), he has cast his historian’s eye over the history of Islam. The Shadow of the Sword is, simply, an imperative read.

Dominion, though, is a different kind of history book again.  Holland is clear: this is not a history of Christianity (it’s narrower and more selective), nor is it a history of Christian thought or theology.  It’s an account of the impact Christianity has had in shaping the assumptions of Western culture, an impact so deep that those who reject the doctrine are unaware that both their rejection and their alternatives are actually based on Christian ideas.

Let me get the superlatives out of the way first: this book is quite superb. Thoroughly researched, beautifully written, expertly selected, and dizzyingly clever.

Growing up, Tom Holland was fascinated by Greece and Rome (and by cricket and dinosaurs, which are for different books), but he came to realise that while he loved the stories he was repulsed by their moral strangeness.  Violence, power and sexual abuse were inherent. So he became fascinated by the fact that somehow, something seems to have violently disrupted that narrative with an alternative that produced meekness, self control, and love of stranger, in turn producing hospitals, universities, democracy and Universal Human Rights.

That violent disruptor was the gospel.

For readers of Rodney Stark or Os Guinness this might be familiar, except for Holland’s breadth and depth. He is an outstanding long-form historian, and his account of the counter narrative, of the sweep of the message from Abraham through to today is, I would have thought, hard to disagree with. Dawkins take note: the narrative ‘Christianity is evil’, is dead.

The pattern of each chapter is the same.  Holland picks one illuminating event from a period, and uses it to cast light both on its immediate context, and today.  That way he takes us from ancient Persia, Greece, Rome, Byzantium, through to President Trump.  He does a masterly job of distilling the Old and New Testament for the ordinary reader. I’d quibble with some of his critical choices on dating and authorship, and most importantly I think he downplays the significance of Jesus’ resurrection, but all in all, this is an astonishingly fair summary from someone who – still – wouldn’t quite call himself a Christian. Of course he has to leave things out; what’s remarkable is what he’s managed to keep in.

This is an ideal book to give to a reading non-Christian.

You travel on.  This is not the kind of history book where nothing happens between the Council of Nicea and Geneva; no, that long millennium is rich in shaping our culture, stone by stone, story by story.  And treasures abound.  Who knew that the abolition of slavery was actually argued from the canons of the church in Bologna, six centuries before Wilberforce? Calvin, when he comes, is given a remarkably kind ride, with Geneva as the centre of care for refugees. The Puritans when they come are shown to have a love for marriage and family and its pleasures.

I will say – perhaps this is inevitable – I find this utterly plausible.  Human Rights have their origin in creation and covenant, Live Aid only worked because of an appeal to common humanity based on centuries of believing we were One in Christ. And when Holland opens the dark alternative, of our culture based not on Christian values, but on some Neitzschian power struggle, he finds it utterly appalling in its knowingly anti-Christian consistency.  As well he should.  The dominance of the strongest has always been an appalling creed.

So his thesis is that Christianity is woven so deeply into the West, that we cannot think outside it. Both John Lennon’s advocacy of free love and the #MeToo movement have Christian origins;  Richard Dawkins is a very Protestant atheists; the French state’s famous secularity depends on a Christian distinction; and most painfully, as Holland recounts visiting the sites of the atrocities committed by ISIS, within miles of their forces, even our concepts of ‘wicked’ and ‘wrong’ show how Christian our values are. That chapter should be printed off and given to the Foreign Office, as a briefing paper. He counterpoints that story with the most moving account of the deep and gentle faith of his godmother.

And I would agree with the counter-thesis too: that when the church has been malign (and we have), it has been on the basis of ignoring its core teaching.

But that sets up a tension which Holland resolves, to my Christian mind, in the wrong way.  He points out, for example, the existence of an apparent double strand in Paul’s teaching on women and ministry, but he prefers to find in them an inconsistency, or, in the case of the Pastorals, an appearance of pseudepigraphy.  For Holland, the stronger of Paul’s arguments has won out over time (the same would apply, obviously, to the argument over slavery, or same-sex relationships).  I would respond that the classic Christian doctrine of Scripture means we seek to resolve such issues rather than remove the inconvenient elements.  That will make us strongly counter-cultural at certain moments, which is something that doesn’t fit neatly into his progressive schema; a schema in which even our current lurch into secularity is itself a deeply Christian phenomenon.

Because I wonder.  It seems to me that there is a missing chapter – a chapter of rebellion and resistance.  The Renaissance is missing.  Now, I know that the title ‘renaissance’, ‘rebirth’, was a piece of clever self-publicity, designed to put Christendom into the ‘Middle Ages’, between the time Rome was dominant, and the time it was rediscovered; into the ‘Dark Ages’ without the light of classical thought which emerged in the self-styled ‘Enlightenment’.  But nevertheless, there has been a self-conscious attempt, from the 1400s on, to build thought, law and culture on the human-as-centre, rather than human-as-creature, or human-as-covenanted.  It may not have succeeded, it may not have been consistent (how could it?), but the attempt was there, repeatedly, and I do wonder whether the grand and true major narrative Holland recounts has blinded him to the smaller alternatives.  He is too persuaded of his thesis, which means that the final chapters become overstretched, and to my mind, implausible.

And there’s a second misreading, I think.  Holland revisits Paul’s teaching about the Law being written on our hearts as evidence for growing autonomy, private conscience and so forth.  Now I think it’s arguable that some of the humanists did argue that way (Erasmus, for example, who doesn’t appear here), but it’s just as arguable that in doing so they were muddying the stream: Paul’s argument for conscience is not an argument for an autonomous conscience; rather, by the work of the Spirit we will all agree to common belief and behaviour. Holland would no doubt argue that Erasmus’s reading was a very Christian one, but I’d want to argue the it wasn’t Christian enough.

But let me add one more point of relevance, which Holland has pointed to, but perhaps without realising how poignantly sharp it is for English Evangelicals like me. (Note to readers from elsewhere: I do mean English, rather than British) The title of the book is a dead giveaway. Dominion. Christianity has intellectual dominion over the mind of the West. Yet what is its fatal flaw? When it reaches for that dominion. When it falls in love with power, class, status. When it despises the treasure of being weak, and prefers the reassuring tones of those who have an assumed right to command. When I was Vice Principal at Oak Hill, we used to recommend that all faculty from overseas read Watching the English, by Kate Fox. It’s a devastating take-down of English mores, and she writes to the effect that readers will notice that there’s no chapter on class – that’s not because it’s unimportant, but because it’s so all pervasive that it cannot be simply distilled or clearly seen.

Back to the excellent Tom Holland. Theologically, I want to argue his case more globally: all human cultural rebellion is based on the rejection of God, and therefore presupposes him. That’s the case Augustine can make in City of God, and how he explains the fall of pre-Christianised Rome. But Holland’s argument is historically based, and narrower, and I think is open to the charge that there are traditions even in the West which are not based on Christianity or its knowing rejection. He would reply, I think, that they have fooled themselves: the humanists did not base themselves on Rome or Greece at all (whose values, had they acknowledged them, they would have found repellant), but on a Christianised ideal, without the doctrine. Again, I think that’s mostly true, but if you look at the rise of modern Stoicism and the sudden popularity of Marcus Aurelius in particular, you can see that there is another story to be told.  Today’s humanists are trying to account for ‘good’, without Christianity, and finding in the Stoics a non-Christian source. Theologically, we can account for that, in common grace, but I’m not sure Holland can.

In other words, for a historian, Holland is surprisingly Whiggish, by which I mean that he is biassed towards the idea of progress and development; his unusual viewpoint being that it is Christianity which has driven those ideas.

Christians, on the other hand, would not deny the benefits of the gospel, but would affirm too that we expect and experience constant spiritual pushback. Pendulums swing.  Revivals happen, and so does Babylonian captivity. Will the gospel win?  Undoubtedly.  Might that happen through a revival of Christianity in the West?  Possibly, although to my mind the extraordinary growth of the church in Africa and in China is a much more likely ground for future hope. In a thousand years time, it might be seen that Christendom has been an interlude in its global spread. Maybe the sleeping dragon of Japan will awake.

But, quibbles aside, this is an astonishing and unmissable book.

Do not be embarrassed about Christianity’s past and influence.

A different version of this book review will appear in Oak Hill College’s journal, Commentary.