I don’t mean the oddities of the people who turn up, or lack of prayer – but the clue’s in the title. When we come to a group Bible Study, what should we be expecting?

1. Bible
It should be obvious that this is the centre – but my experience is that all too easily we let someone or something take the Bible’s place. For example:

Someone’s needs. It might be sudden, or chronic; for someone present or someone absent; but whatever it is, it’s on that person’s mind, and he’s not going to let you go into some other area without bringing you back to his

I’m not heartless. Life in a fallen world throws hideous things at people, and there are times when it is right to park the plans for the evening and support someone in prayer and practical acts.

But you don’t have to have been in many groups to know that some people are very effective at hijacking the evening onto their needs time and again. Rather than the Bible, it’s the latest turn in that person’s problem which is centre stage.

To the extent that you can, discuss the underlying issue, that of dethroning the Bible, with the group and with the person. But you’ll need to agree as a group not to let it happen.

Someone’s issues. Not their life, but their theological hobbies: Israel, perhaps, or Revelation. Spiritual gifts (too many, not enough, the wrong sort, unused) is another good one to hold you up.

Even worse, is when someone has a habit of raising theoretical issues. “Let me be devil’s advocate,” she says, and you’re off down the rabbit hole, chasing questions that can never be answered because the problem is fake.

Don’t allow the devil’s advocate airtime. It’s a destructive mode of thought, which is never helpful

2. Study
Thinking is hard work. Most of us don’t have to do it very often, and when we do we know about it.

I once joined a French conversation class. After two hours, I could hardly think in English let lone French. And when I phoned home, I went strangely silent

So most of us are happy to stay in our fixed grooves of thought and opinion, and if they’re broadly orthodox we think we’re OK.

But God wants us to keep changing our minds. The Greek word for ‘repentance’, metanoia, means to change your mind. As does the word ‘repentance’ (becoming pensive again) if you think about it.

If we get into the habit of going to a Bible study to air our views, then we shall never change. But if we go in order to study, then we’re open to new ideas. That, though, is stretching and difficult.

Of course a Bible study isn’t a school lesson: it must relate to life and not just to the world of the text. It’s not learning for its own sake. But it is learning.

3. Group
Why do we study the Bible in small groups? To share knowledge? Pool ignorance? Instil a habit or reading the Bible which is harder to do on your own?

No. We do it because we are told to ‘teach one another.’

One is a micro version of a sermon: with questions and right answers, perhaps, but there primarily to learn what the study leader has already learnt.

The other takes a lead from the leader (after all, she’s done the prep), and accepts that the direction she’s set is likely to be right. But the group is open to the idea that there might be an even better explanation. That the study notes might have it wrong. That the new Christian, with the help of the Holy Spirit, might have an insight better than the more mature heads around the room.

The key question is whether the leader expects to learn from the group discussion. Is the group leader a member of the group?

Resource
I really like Leading Better Bible Studies, by Morris and Morris, available from the Good Book Company 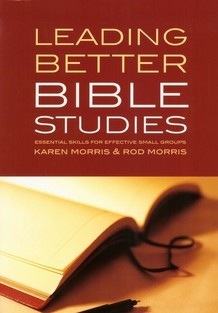 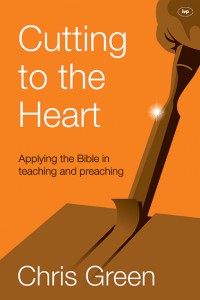 🇬🇧You can now buy ‘Cutting to the Heart – Applying the  Bible in Teaching and Preaching’ at a discount from 10ofthose here.

🇬🇧Or from Amazon here. and your Kindle  here.

🇺🇸US readers can buy from Amazon here, and as a Kindle edition,  here.

Aussie? Koorong has it here.