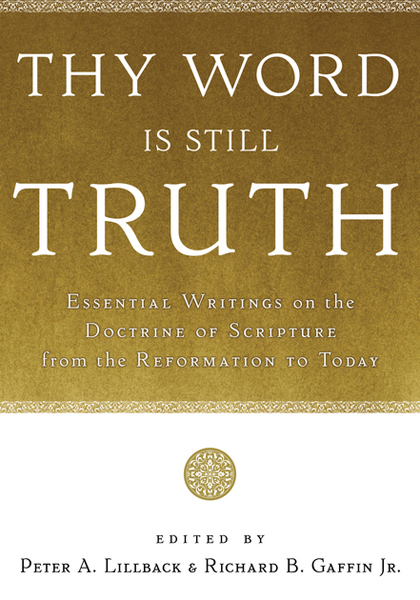 A review of recent big books on the Bible, Part Four: Westminster Seminary

A valuable treasure trove on the Reformed view of Scripture, from Luther to today 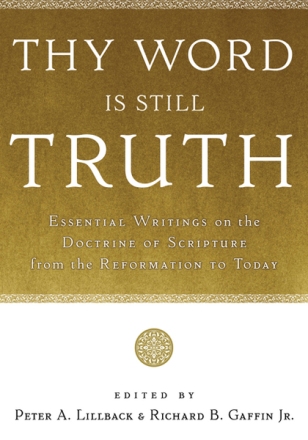 Peter A. Lillback and Richard B. Gaffin (eds.) Thy Word Is Still Truth Phillipsburg: Presbyterian and Reformed, 2013)

Remember that scene in Crocodile Dundee II, where some young hoodlums threaten our hero and his girl on the subway? “Give him your wallet – he’s got a knife” she says, understandably scared. “No,” says our Aussie charmer, pulling out his best Bowie, ‘THAT’s a knife.”

Well, Drs Carson, Piper and MacArthur THIS is a book. 1392 pages, including an index (Carson, in weedy second place, couldn’t get beyond 1256).

It’s trying to do several things, and its usefulness to you will depend on the number of those you need to access.  Fundamentally, it is a Reader: a compilation of the most critical writings on the Doctrine of Scripture in the Reformed tradition.  It has been compiled by the faculty of Westminster Seminary which gives it a particular flavour, of which more anon.

So, first of all, if you want a compilation of the central writings of the main Reformers and their successors on the continent, and in England and Scotland, their Confessions and Catechisms, and then key contributions up to the Princeton position, the first half of the book is for you.  I do want such a volume, and I’m glad to have it.  Frankly, although all its content is available freely online, I cant keep that many tabs open on my browser.

Second, and this is where the focus narrows, the contributions trace key issues in the Westminster Seminary’s history.  These are not niche at all: they encompass Gresham Machen, Van Til, John Murray.  Then a section on Westminster’s unique and brilliant contribution to Biblical theology: Vos, Clowney, Poythress, Silva, Gaffin.  So this is really important stuff , but the collection is not intending to be exhaustive.

Third, we get the key writings on current debates over the Reformed position, well represented by (among others) Sinclair Ferguson, John Frame, Bruce Waltke and Peter Lillback.

And finally, briefly but I suspect the casus belli for the book, there are some Westminster-related pieces on the well-known departure of Peter Enns.

The quality is, obviously, high, because most of these pieces are the best writings of the best theologians, whose work has stood the test of time.  Anyone wanting a decent primer on a Reformed view of Scripture really could do no better.  It’s not one to read at bedtime (well, unless you need some help), but I have found it a really helpful compilation of a particular strand of which I am a part (the 39 Articles and the 1547 Homiles are both included).  It doesn’t pretend to be exhaustive – if it were, the lack of Lausanne, the Chicago Statement or anything by Packer would damn it – but in an attempt to explore and defend Westminster’s own position, they have shown us a valuable treasure trove.

Use in a library, and buy when prompted by your inner theological geek.