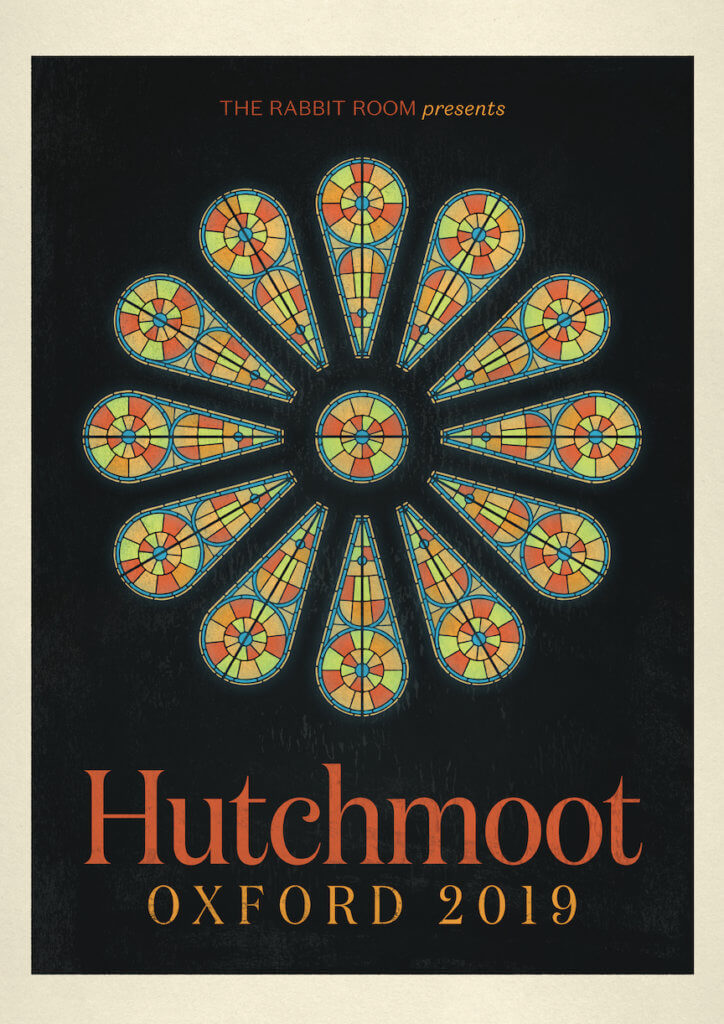 Hutchmoot has just happened, in the UK for the first time. What, you ask, is a Hutchmoot? Well, let me tell you a story.

In Nashville, Tennessee, lives the wonderfully talented Andrew Peterson.  He’s a novelist, and a publisher, and a family man, and he keeps bees, but he is also, and above all,  a prodigiously brilliant Christian singer-songwriter. Two of his songs count among the most beautiful I have ever heard: Queen of Iowa, and Is He Worthy?

Around a decade ago, he and some friends started a little gathering for Christian artists and creatives –  not a conference, more a way-meeting of like-minded believers – in Nashville.  It’s grown, developed into a website and a publishing house, and a couple of of weeks ago, it held its first gathering in Oxford.

Why Oxford?  Well, let me tell you another story.

Back in the mid-twentieth century, a group of Christian friends, mostly Oxford dons, would meet to share the stories they were writing and enjoying. You know them, of course: C.S. Lewis, J.R.R.Tolkein, and Charles Williams became the most prominent, and they were called The Inklings. They met in a pub, ‘The Eagle and Child,’ in a regular spot – a room called The Rabbit Room.

Picture, then, the admiring Andrew Peterson checking out this pub a few years ago, and realising that if he wanted to recreate this idea, ‘The Rabbit Room’ would be a perfect name – and it is the name of his website.  And where do rabbits meet?  In a hutch.  And in what must be a nod to Tolkien, they called their regular gathering, A Hutchmoot.

Hence a three-day gathering in north Oxford, of musicians, writers, artists, creatives of all kinds, coming together to share, learn, worship, eat, and think, in a context of generous Christian friendship.

Does it work?  Of course it works!  I sat in an astonishing seminar on the roots of Spirituals in the American South – with the brilliant Ruth Naomi Floyd, who would lecture and then burst into song.  I had a long, long conversation with a Manga artist, hoping that his cool would rub off on me.  And we sang – my, how we sang.

So the question from the organisers is whether to do it again, and the answer from me is a resounding, ‘yes’.  Of course.  Christian creatives have a lonely path, and people like me often wonder how to encourage them; this is the way.

Having said that, and not to dilute my enthusiasm, I’d want to add a couple of comments, one on style and the other on culture.

So, style.  And let’s put a big banner over this: ‘No disagreeing over matters of taste.’  OK?  You like Marmite, and I like marmalade – we can still be friends.

I really don’t enjoy C.S.Lewis as a novelist. He is of course a first rate apologist, and – although I am not capable of judging – he seems to me a peerless literary critic. But there is something ploddingly predictable about Narnia.

I remember being off sick from school, and picking up The Lion, The Witch, and the Wardrobe  as a bit of light reading.  I must have read it before, but I was about ten at this point.  I suddenly realised that it was an allegory, and then not a terribly interesting one.  Yes, he puts things well, and yes I’ve quoted Mr Beaver on Aslan not being safe, and Lucy on Aslan getting bigger, and the final paragraph of The Last Battle.  The thing is, those are good points made well by Lewis elsewhere.  But once you’ve cracked the code, there’s no surprises there.

I do rate Tolkien, though, because he did something extremely clever. These days there’s been an immense amount of work done by Hollywood on how plots function, and so we know about The Hero’s Journey, and we can predict that Gandalf will die and rise again, that the hobbits will succeed, and so on. Every movie has the structure. The thing is, Tolkien got there first. His work on the Norse sagas and so on gave him a deep understanding of the fundamental shapes of stories (much deeper than the movies can show), and he wove them into something of real complexity and imaginative depth – and yet, because they are created with his understanding of narrative, it ends pleasingly, and still with an eye to the future.

I also remember my first encounter with The Lord of the Rings, aged around fourteen, and how immersive and wondrous I found it –  and how the moment I finished the last page I turned back to the first, because I couldn’t bear this magical world to stop existing.

So I really do get why people find this such a moving myth. That feeling I had, of longing for a lost and better world, is the experience C.S. Lewis described so famously, and – for me – it was achieved far better in Middle Earth.

The other thing is that, having read a lot of stuff since then, I’ve rather lost my taste for all things hobbity. I recognise that the fantasy genre is hugely popular, and the stories it can tell of another world are powerful; but I do want to underline that it’s not the only genre that can do that. Sci fi does it. Historical fiction does it. Jane Austen does it. Marilynne Robinson can do it.

Dystopian novels set in rain-soaked Los Angeles can do it.

And not to blame Tolkien for this, but the popularity of the books – and even more of the movies – have turned this waistcoat-wearing, pipe-smoking, long-walks-in-the-hedgerows view of England into a cliché, and a parody of itself.  It’s had a long ride, of course, but it was already a lazy piece of nostalgia in Chesterton and Belloc; it was a recognisable trope back in Dickens, probably in Fielding.

I did say that this was a matter of taste. You can disagree with me. But the longings which Andrew Peterson so brilliantly evokes are true longings, and so they must not be for the past which was, and is lost, but for the future which will be; not for vanishing childhood but emerging maturity in Christ; not for a garden that is locked and overgrown but a far better garden to come, and a garden-city at that.

And I want to establish that Christians can write and paint about this world, too, and evoke that same longing.

Which is my point about culture.

I may have overstated my case for effect, but I don’t think the Brits quite admire the Inklings in the same way that our Cousins do. Which means that when you read that Hutchmoot met in North Oxford, if you’re not British you booked your ticket, and if you are British part of you sighed, and thought, Really? Again? Part of this Brit resists the sentimentalism, the twinkle, the twee. I say this really gently – it’s Anglophile in a way that the English aren’t.

Because we know that our pubs are lovely – but also that there are many lovelier than the Eagle and Child, with more room to spread your legs out and take your time.  We do know that Oxford is extremely pretty, in parts – but we also know that it has become an overpriced parody of itself too, and that there are many pretty and prettier places which haven’t. And we know that Anglo Saxon art and design is very beautiful, but so too is the elegance of twenty first century minimalism.

So here’s my challenge to Hutchmoot – yes we need you again.  We need the language, the encouragement, the fellowship, the song. This is a lonely place for Christian creatives and their friends. We need to meet together, stretch our legs and tell our tales of the journey. I too like a warm fire, a pint, and a wet dog.

But we need you to help us to do it looking forwards, not back, and with our eyes open, not closed.