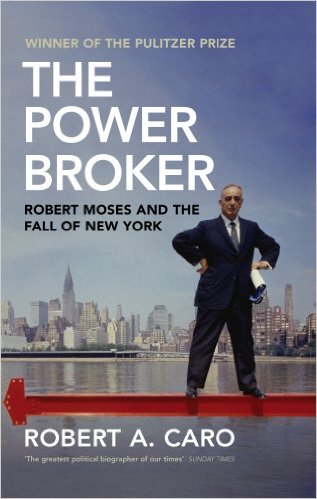 First, the author.  Robert A. Caro is justifiably world-famous in a small niche: he is unquestionably the best political biographer of our day, and he is still working on one of the most remarkable biographies of our time. He has a lifetime task of writing the biography of President Lyndon B. Johnson.  Anyone with any pretension to political office in our country or the US has devoured this work as it has come out, and the most recent volume, The Passage to Power, is almost unimaginably good.  It describes how a master political animal became an unlikely Vice President and then, in probably the most shocking day in twentieth century politics, it recounts, minute by minute, how he became president, on a plane, after the assassination of Kennedy.  Harrowing, vital, and gripping, it is almost the finest political biography that has been written.  Fans of the West Wing have an answer for their famine.

Almost the finest, because to stunning acclaim, Caro has also written the finest.  If you doubt me, read the reviews that this book produced on its publication in 1974, or that it keeps receiving now that it has at last been published in the UK.

In The Power Broker Caro has written the life and achievements of Robert Moses, the most powerful but unelected man in the history of New York, or even America, who singlehandedly arrange 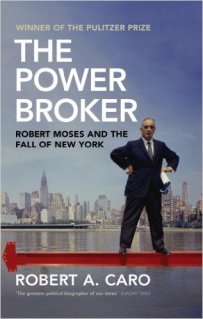 d the building of its bridges, tunnels, hundreds of miles of parkways and millions of acres of parks, highways, beaches, dams, power plants, slum clearances, the Lincoln Centre, the World’s Fair, and the headquarters of the United Nations. A man who handled tens, no hundreds, of billions of dollars over decades, and whose legacy is still shaping his city.  Caro struggles to find a comparison for Moses’ achievements: arguably Haussman had as powerful a hand on Paris, but he didn’t build the world’s longest suspension bridge in the process.  Caro has to stretch back to the Emperor Augustus to find his equal in ambition for urban planning.

Now I’m doing what every reviewer struggles with in tackling this huge book: I’m risking it sounding boring.  What possible interest could there be in reading a book about roads and bridges?

Just this: what motivated this extraordinary complex man was not wealth (he wasn’t interested in the vast amounts money he handled, and was consistently unbribable) or sexual desire; it was only, but to an extraordinary degree, an insatiable appetite for power.

This man was a dreadful genius of awesome political ability, and he virtually ran New York for decades without ever having to ask for anyone’s votes.  Mayors, governors, even presidents come and go in these pages, each finding that he is out of their reach to bring him to heel.  Formidably intelligent and with almost every person in New York in his pocket, Moses was the most important but hidden person that peacetime in the twentieth century saw.  I mean that, and it is no understatement: I am not aware of any other unelected or elected individual who begins to approach Moses in terms of the aggregation of raw power. A reader starts to wonder if the only comparable models are tyrants.

He had seemingly inexhaustible physical and intellectual energy, and there were many, many times when I felt deeply in awe of what one man could do if he were willing to pay almost any price (I say ‘almost’, because there is never a hint of criminality in Moses’ make-up).  Part of me wonders what could be achieved if we had such single minded Christians.  And part of me recoils in horror.

Because he was vile. The future of New York was mapped out in his mind from the 1920s, and he would bulldoze every person and building in his way until the early 1970’s.  Only rarely did he lose, but those losses were never forgotten and always paid for.  Unimaginably thorough files meant he kept tabs on everyone who mattered, and while he was fiercely loyal to the ‘Moses men,’ he was utterly ruthless in disposing of those who weren’t.  Including his own brother. Jewish, he hated Jews – and blacks, and Puerto Ricans, and the poor generally.  He lied, twisted and, in our contemporary phrase, ‘span’ his way through almost all the press, bullying, bribing, cajoling, or threatening with disclosure even the most minor of officials.

And the consequences of his work were dreadful even his lifetime, but no-one could stop him.  Traffic flowing in an uncontrollable spiral meant his roads and bridges were jammed as soon as they were opened; slums became larger slums; decent neighbourhoods had their hearts ripped out; proper infrastructure was ignored.

All this while having the public reputation of the saviour of the city, the incorruptible Robert Moses, who dazzled with his largesse.

Caro makes this thumping 1300 page brick of a book an absolutely gripping page turner.  The beginning is shining, and Moses’ opening of Jones Beach  was a triumph for New York. And when the fall eventually comes, as you know it will, it is with almost Greek or Shakespearean inevitability, the result of his own pride and at his own hand.  And make no mistake: this is a brave book, because Caro had to face down Moses’ own bullying to have it published.

Now, why do I commend this book to pastors?  Do I want to turn you into policy wonks, or get you to share my love of political chicanery?

I’m not going to answer that second question, but I will answer the first –  and I’ve already hinted at it.

Three times this week I have come across stories of biblically-minded pastors who have had to step back from ministry.  In none of them was the presenting issue either corrupt use of money or a misuse of sex.

No, it was the third fatal flaw: love of power.  I have come to think that it’s the major blind spot in our thinking about Christian ministry.  We can easily identify issues of money and sex, or even of alcohol, but we are so enamoured of strong, capable, charismatic leaders that we don’t notice how close many of them come to being bullies, or little tyrants.

Remember 3 John? I wrote to the church, but Diotrephes, who loves to be first, would have nothing to with us. As I’ve said before, that is the moment where we can see a church turn into a cult. He loved to be first.

It’s taken me months to read Caro, and I don’t begrudge a single minute of it.  I haven’t skipped a page or even a paragraph, and there were many I’ve read several times (p136 is repeatedly cited by intelligent reviewers as probably the finest single sequence of paragraphs in a biography, ever).  If you are a serious reader, and especially if you love history or politics, I doubt you will find a better non-fiction book to tackle in many a long year.

But if you are a pastor, stop frequently to look in the mirror.

3 comments on “Book Review: The Power Broker, Robert A. Caro”