Three books to make you think like Tim Keller: No. 1,  The World Beyond Your Head

If I said that this was the most important piece of secular philosophy I have read in a long time, you’d probably switch off.  But it is, and I want you to read it.

OK, so that title was a tiny bit of clickbait, but I want to draw your attention to three books which have come across my desk recently, each of which has a unique insight into something going on at the moment in our culture, to which we need to pay attention, and where we need to develop a Christian mind. 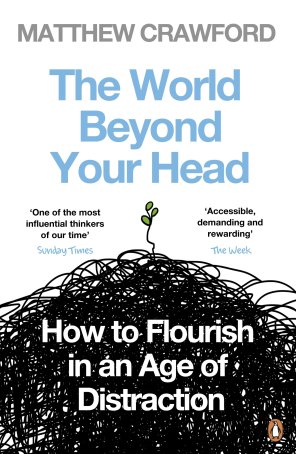 The World Beyond Your Head: How to Flourish in an Age of Distraction

If I said that this was the most important piece of secular philosophy I have read in a long time, you’d probably switch off.  But it is, and I want you to read it. This book is so important, and so rare, that my first instinct on completing it was to want to read it again to make sure I understood it.

Crawford notices – like we all notice – that we are living in a distracted and distracting culture.  A thousand flags grab and twist my attention: the automated voice at the self checkout, the advert that pops up while I’m reading an article, you can add to the list.

We know, because research keeps proving it, that we find it irritating and captivating in equal measure.  And this is no accident. This cultural phenomenon is deliberately designed by advertisers and others to be addictive: to activate the pleasure sensors that crave novelty and excitement, and keep them watching. To tickle the ones that love to learn, and master, and conquer, and give just enough of an illusion of doing so, to keep us coming back for more.  And the pleasure it gives, being in ‘the zone’, is what keeps us hooked.

Game designers know this, and we know it too. The cross-over between the real and the virtual is well attested in the levels of aggression in those who play “Call of Duty’, or suchlike.

But a raft of other people know this too –  including, and this chapter was really alarming, the people who make fortunes through deliberately addictive gaming machines.  Crawford has a terrifying chapter on the casinos of Las Vegas – which also applies to the machines in your local betting shop too.

Crawford is unique in exploring just how deeply this phenomenon is being built into our culture, how it plays with our brains (chemically, I mean), and the awful, deadening consequences.  He identifies why we get lost channel surfing, spending hours half-watching things we don’t want to, but unable to switch off.

Throughout the book Crawford contrasts the way this experience feeds us, compared to the issues of developing character and learning skills, in the real world.  He contrasts the experience of learning a computer game, to his preferred craft of repairing and riding motorcycles, or building real organs: there is a similarity of learning, but there is a profoundly different encounter with reality in those cases.  Crash a bike on a screen, and you’re rewarded with fake blood, and a chance to try again.  Corner a real bike wrongly and you die.  Learning to corner a bike at high speed requires dedication and extreme courage. and a knowledge of some bizarre physics. There’s a difference.

Children are especially vulnerable to this shift, and he’s brilliant on Disney, and Mickey Mouse’s comedy.  Time was when Mickey, Donald and the gang, represented cartoon versions of physical comedy – Donald on ice was funny because it was an extreme version of real skating, and so on. Falling over was funny.   The same would be true of other cartoons too – remember when people were troubled because Tom and Jerry were too violent? But it’s only funny if frying pans really do hurt,

Now, though, Mickey’s comedy is not based on an extreme and extended version of reality, but a magical version of non-reality.  There are no insurmountable problems. The gang don’t have to obey something like the laws of gravity any more – so even falling off a cliff isn’t funny-scary. children learn to adjust reality to their wishes, rather than vice versa.

Crawford’s solution is that we must force ourselves and our children to engage in real-world tasks in which acquiring a skill takes time, effort and attention, and where failure is real. His preference is for hands-on skills, but gives time to tasks like learning a language too.  Anything in which there is an external reality.

I have summarised glibly what I hope you can see is a really important book.

So, how to evaluate?

First, I think he is bang on the money with the diagnosis, and profoundly so.  Other people have noticed the problem, and I have already raved about Cal Newport’s book Deep Work, which is hugely important.  But Crawford has shown more clearly than anyone else I have read, what happens to our brains when we engage in hyper-stimulating non-real world.  He shows how it is psychologically and chemically stimulating and addictive, and why the habits it forms are so hard to shake.

Second, I think he is right about healthy alternatives – and again, physiological science backs this up.  We are made to move, and engage.  We are made to learn and relearn, by encountering reality. Learning to ride a bike, catch a ball, speak French, are not skills you can learn in your head.  So, get off your screen and learn how to barbecue or something.

In fact, I think that’s what’s behind the whole roast-your-own-coffee-beans, marinade-your steak-for-two-days, kind of move.  We are craving, and creating, encounters with the real.

Which brings me to a point Crawford does not, and cannot, make.

God is the ultimate real reality, and in knowing him we know truth.  Only provided we know him on his terms, and the ways he has laid down.

If Feuerbach was right, and God is just humanity written on the skies, then any – or no – spirituality will do. But if God is real, and has laid down how he may be known, then that impacts the way we worship him and disciple each other.

That should make us think about how we disciple and lead God’s people.

Next time, the vanishing differences between humans and robots.

Buy here: The World Beyond Your Head: How to Flourish in an Age of Distraction

2 comments on “Three books to make you think like Tim Keller: No. 1,  The World Beyond Your Head”