Feedback on feedback – is there a way to get better at getting better?

If we become more attentive to our decisions to act and to the feedback, we can improve more carefully.

By Chris Green in preachers, preaching, teaching, Uncategorized on 05/02/2018
2 comments

I was recently in a setting where a roomful of people was invited to give feedback on something they’d just experienced.   One hundred people, each with a blank piece of a paper, answering various questions.

Now it’s very easy to be cynical about such things, along the lines of ‘If you ask enough people, you get enough contradictory pieces of feedback that you can carry on doing what you want to do anyway.’  Or as the team leader of that event muttered to me, ‘I don’t know why we do this – it doesn’t change anything, and it just gives them a chance to moan.’

But let’s try to turn it round so we can learn about feedback and how to improve it.

There are basically only two good questions worth asking: ‘What went well’, and ‘Even better if…’  That is, you are asking people on both occasions to be positive rather than carp, and to invite them to imagine a solution to their problems rather than just whinge.

Jennifer Riel and Roger Martin draw it like this, in their book Creating Better Choices:

This is what they term ‘Single Loop Learning’, where we just look at the connections between Actions and Outcomes.  And then, presumedly adjust the next outcome in the light of that. Buy better coffee for the machine.  Use better lightbulbs.  empty the bins between the services. Stuff like that.

But then they invite us to take one step back, into ‘Double Loop Learning.’ In this we start to probe why we thought that Action was worth taking in the first place, and why we keep building momentum on it, persisting despite it not being the 100% success we’d dreamed of, adjusting but not abandoning, and so on.

No, we don’t buy fancy coffee, because we have a higher value that our hospitality is free, informal and homely.  We don’t offer double espressos with all the variants at home, so we don’t at church. 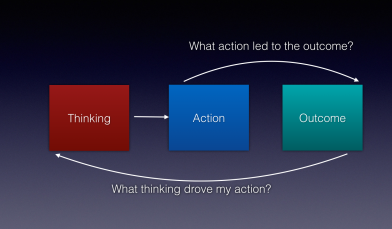 Let’s make this real.  Under ‘Action’ put ‘All of last year’s preaching’, and under ‘Outcome’, ‘The difference it made to people’s conversion, discipleship and persistence.’  Now if you’re like me, you get a lot of feedback on your preaching, and some of it is quite – ahem – forceful.  Now if my aim was to keep people united and happy I would immediately trim my messages carefully, noting the ones that got the best ‘approval ratings’ and the ones that didn’t do so well, and aiming to get the needle moving in the right direction

But that third ‘Thinking’ box stops me doing that. That is where I put my thinking about what preaching is, and how it works.  That’s what sets the wheels in motion each Monday, keeps me moving through the week, and brings me to Sunday night. and that thinking is what helps me to filter the feedback, process it, and decide what to do with it.

This is where I become self-aware,  OK, I do need to make sure I don’t go over 25 minutes, and I will quietly set a timer so I can control myself.  I will consciously try to use stories which will connect with a tribe I’m not part of.  I will deliberately monitor my ability to become pretentious, or a parody, or eccentric.

But there is one more box. Because, ultimately, we are not consumer-driven.

We preach biblically because we believe that is how God’s people hear his voice, as they are gathered together.  We pay close, word by word attention to the text, because of our convictions about scripture.

Yes, I know that that is used as a self defence mechanism by some who do need to hear that they are boring, irrelevant, too long and incomprehensible. If we are persistently being told that we should listen carefully, and bring it to our Master for correction and improvement.  We are told to feed the sheep, not prove to them that food is boring.

But there should a deep set of reasons for the way we preach.  When Riel and Martin diagram it, they call this ‘Stance’ – I’ve usually heard it described as ‘worldview.’  This the way I understand reality and the way it is ordered under God’s plan.  This is the most profound part of our thinking, and and it needs to come into play too.  Otherwise it is just an unexamined prejudice.

Now, where in that diagram do you put your decisions about the length of your sermon?  The way you structure it? Whether you need handouts or not?  Whether you would use video clips, or silence, or an interview?

I think they lie in the red box, ‘Thinking’, where the feedback is processed, filtered, considered in the light of our Worldview, and then feeds back into the next action.

What do you think – helpful? Pile in!

2 comments on “Feedback on feedback – is there a way to get better at getting better?”