UPDATE: The NIV Study Bible now has a large print edition. This is a substantially larger

book, but if it is going to to live on your desk it might be worth the extra investment for the sake of legibility.

UPDATE: Some editions of the NIV have a product flaw on p2347/8, where a thicker piece of paper has been gummed into 1 Cor 11.  Check before you buy, if possible.

What is a Study Bible for?

A study Bible is an odd fish.  It contains within its covers a translation, maps and charts, concordance, running exegetical commentary and supplementary articles.  This is not a new idea, and an equivalent edition from the time of Elizabeth the First is eerily similar in size, shape and general intent to the contemporary editions. Today, though, not only is the scholarship much more refined, each of those contributing elements is available elsewhere and in greater depth from other tools in a pastor’s study or online.  What a decent study bible does is provide enough support within its covers that a nontechnical reader, or a preacher who has not built up a decent library, can have a decent set of tools within one book.

Which makes reviewing one quite tricky.  There’s no point reviewing the translation per se, because the main counters of the pros and cons for each one are widely known. Personally, I initially found that the ESV was enormously clarifying when it first came out, as though I could read an English text in high definition.  The weaknesses of the 1984 NIV were even more evident.  But the 2011 NIV has changed the game, and leaving aside the contested argument about gender inclusiveness, has made the ESV feel stilted.  An example: I was reading Romans 1 the other day, and the ESV’s first sentence is 103 words long (I counted twice, to make sure) in one paragraph; the NIV breaks the text down into three sentences, which is much more readable.  It won’t do to observe prissily that it’s one sentence in the Greek so it ought to be one sentence in English: that is linguistically inept, as any basic experience of translating Greek into English would show, and in any case Paul didn’t write in sentences at all. Or use paragraphs, capital letters, punctuation, or any of the tools available to a contemporary typesetter.

But when we have removed the key distinctive of the translation itself, the similarities between the various offerings make comparisons very hard.  I want to get to the NIV, so let’s narrow the field.

is an edition of the ESV I find invaluable, blending biblical theology and application in a most helpful way.  Crossway has done a brilliant production of it, and result is crisp and easy to read. It is a regular companion in my sermon prep.  However, despite  maps and a concordance, it is not a study bible per se, we need to park it at this point.  It also distorts the field slightly: because it is trying to do far less than a regular study bible, it is more compact and yet has more space to play with on the page, so it is more comfortable to read.  I shall return to production quality later, but it is worth pointing out that one reason it is so easy to read is the brilliant whiteness and opacity of the paper it is printed on.  None of the study bibles match that, which is a pity.

I need to park the New Living Translation Study Bible.  This is a shame, because I am a real fan of this fluid and accurate version, which I wish would gain more traction in the UK.  As I have often noted, if I were pastoring a church in an area with few graduates, it would probably be my translation of choice. One edition of it should be on the preachers desk, so that we can see how an even more dynamic equivalence translation than the NIV smooths the path of understanding. But  it’s not widely used enough to be the one, single study bible to recommend – although the quality of the contributory notes is excellent.  To be picky, the NLT study bible now looks a bit dated: apart from the maps at the end, the edition is entirely in black and white throughout.

I also need to drop the Holman translation, for the similar reason that it is not widely used in my circles.  I have not held a copy of this study bible, but from what I can see online it fills the exact brief of the others and to a similar quality.  The contributors look to be of equal merit, and in many cases the same names crop up for the obvious reason that they are the outstanding scholars of our day. I was initially impressed with the HCSB as a translation, nestling between NIV and ESV, but I have bumped against occasional eccentricities along the way, and I have now put it on my reserve list. 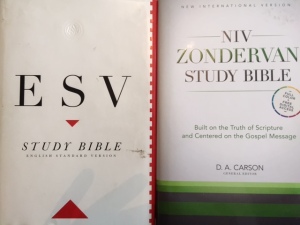 Which brings us to the main event, ESV, and NIV, and it really is a close race.  Here we have two substantial contributions, written to almost identical specifications, and both are at the top of their game, offering online editions as well to those who purchase the paper version. The ESV, although a tad older, also has a mobile app, and offers a daily reading schedule.

They match each other pace for pace.  The ESV offers 19,500 notes, the NIV 20,000. Tim Challies has a more detailed infographic here. By way of contributors, on John’s gospel, for instance, I would have to choose between Carson (NIV) and Kõstenberger (ESV).  Even tougher, on Romans I would have to choose between Schreiner (ESV) and Moo (NIV).  To give you an idea of how tight the competition is, the New Living Translation notes are also by Moo, so that’s no slouch either, and remember that Schreiner and Moo worked together to produce the translation of Romans for NLT. This really is a close field.

The bibles are distinguishable when it comes to the articles at the back, because the ESV’s are constructed according to systematic theology, the NIV’s according to biblical theology. But that really doesn’t help me choose between them, because both are mouthwatering collections by stunning casts. Don Carson steered the NIV editorial team, and Wayne Grudem the ESV’s.

It’s like asking me to choose between Mozart and Beethoven.

Let’s look at the stuff in the margins.  The NIV, using the Zondervan database, has way more diagrams, charts and photographs interspersed throughout the text.  You can tell that this is a publisher with several bible dictionaries on their back list which they can raid.  The ESV obviously had to commission much more sparingly.  On the other hand, the ESV did at least one set of diagrams very cleverly: I love the way that throughout the text there are diagrams of Jerusalem, from the same perspective, comparing how it grew and changed over time.  That is a clever touch, and a useful one.

So let’s look at the margins themselves: the layout and production values – and yes, this is like distinguishing Leornardo and Michelangelo according to the paper they drew on. Size and length are identical, or close enough to make no differences. I have already commented on the brightness and quality of the Gospel Transformation Bible on the page; neither of these comes close to that, and I imagine that is partly a cost issue, and partly because thicker paper makes a thicker bible.

In terms of layout, and this is a highly personal view, the NIV nudges ahead: the way they have designed the page means that there is less visual clutter, and more space for the text itself to stand out.  They use colour slightly more than the ESV, for the headings as well as chapter numbers, which makes the end result more pleasing to look at.  Unfortunately, that is bought at a price, because the way they have gained the white space without adding to the page count is to reduce the font size slightly, making it harder to read.  The notes at the bottom of the page are in a tinted box, which added to an even smaller font makes it even less legible.  That doesn’t make it unusable by any means, but I have both sitting beside me and by natural light it is obvious that the ESV is easier on the reading eye.  This may only be a problem to readers of a certain age (ahem), but worth noting – especially as the size constraints mean that both publishers have gone for thinner paper which is more transparent, although the ESV is worse in this regard. UPDATE – I have now seen the NIV Large print edition, and this has solved the legibility issue, although at the inevitable cost of a larger page size.  That edition is a brick.

If I were giving a gift, either would be a delight.  The ESV is designed to be used that way, because it has some pages at the front for births and family events, but we can ignore that for evaluation purposes.  In terms of feel in the hand (good grief, how trivial this review has become to distinguish these two!) I prefer the quality of the ESV, both with and without its dustjacket.  But this really is a first-world problem.

To a fan of systematic theology I would give the NIV, as a necessary counterweight; a biblical theologian would find the ESV equally slightly countercultural; these two tools are coherent and we each need to read against our bias.

As a pastor I might think to buy the one that matches the translation we use in church, although that’s not a terribly valid reason. If I were wanting to buy one of these translations for the first time, and I wanted more than a paperback to evaluate it, I might buy the study bible for the added value rather than a straight hardback.  But I, like many of us, have several editions knocking around already so that doesn’t help.

OK, here’s the deal.  God has made an annual cycle in which you have both Christmas and a birthday. Go mad, enjoy yourself, and get both.  Austerity, begone!

You can buy the ESV here, and the NIV here.

Want to be in the loop? You know the drill.

Processing…
Success! You're on the list.
Whoops! There was an error and we couldn't process your subscription. Please reload the page and try again.