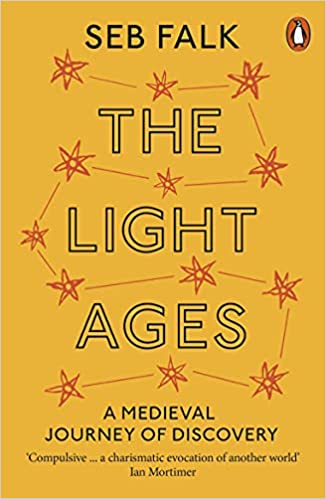 Seb Falk, The Light Ages – a book review for pastors

Christians have a vested interested in the Christianised Middle Ages; was it really a time of mud and ignorance?  Or is that a piece of ignorant mud-slinging?

Prepare to be dazzled.

One of the laziest shortcuts in current journalism is to dismiss something we don’t like or understand  as ‘Medieval’, or ‘belonging to the Dark Ages’. Currently it’s the barbarism of the Taliban which takes the label, but it can be anything which doesn’t fit 21st Century Western liberal values – including, as you might have encountered it, orthodox Christianity.  Anything which is  ‘like something out of the Dark Ages’, is contrasted, pretty obviously, with the rationality, modernity and secularity of ‘The Enlightenment’. Anything from the ‘Middle’ Ages is infested with plagues, mud, and ignorance, the low point between the twin peaks of classical Greece or Rome, and the Renaissance (‘rebirth’) of those values.

Now, Christians have a vested interested in that period, because that was a time when our beliefs were apparently dominant in Western Europe; were the 1300s really a time of mud and ignorance?  Or is that itself a piece of ignorant mud-slinging?

Enter Seb Falk. Falk is an historian and lecturer at Cambridge, where he works as a medievalist in the history of science.  Science.  Medieval science.

How could there be such a thing?  Didn’t science pretty much stop with Aristotle and start again with Bacon?

Well, no.  Medieval mathematicians and astronomers were able to calculate to multiple fractions with remarkable accuracy and speed, and construct incredibly intricate tools to work with them.

Falk takes us into this extraordinary world by following a monk/mathematician/astronomer called John of Westwyk, through his abbey at St Albans, studies at Oxford and other travels, and through his intellectual odyssey of clocks, mathematical tables and astrolabes.

Stay with that word, astrolabe.  Because we live post-Copernicus, and the understanding of the sun as the centre of the solar system, we can start to believe the lie that what preceded that insight was just ignorance.

Not so.  On a dark night we can still see the steady procession of the stars which measure the year and our global position, with the same accuracy that John of Westwyk knew.  We now know why the stars appear and revolve as they do (the earth rotates around the sun, on an elipse, and at an angle), but people for thousands of years have always observed that the stars do so, with unfailing annual precision.  Knowing which stars appear when, at what time of night and at what season of the year, and comparing the results in different cities across the continents, from Christendom through Islamic cultures to China, navigators were able to make remarkably sophisticated maps and plan incredibly complex journeys.

And a monk in St Albans knew exactly what time it was in the middle of the night in October, to ring the bell for chapel.

Leave aside the regularity of the stars and the sun – what about those wandering lights, the planets? Tracking, backtracking, looping their way across the night sky, varying in size and brightness, they might appear erratic and unfixed.

But of course, they weren’t.  And thousands of years of astronomy, carefully recorded, had taught that the planets performed their slow dance in perfect rhythm and predictability.

The complexity of predicting those movements was the challenge, but one that was met with extraordinary ingenuity and precision.  An Astrolabe was an engraved brass disk, the size of a small plate, to which other engraved rings and disks could be added. With its help, the position of any known star or planet, on any date, could be calculated, both backwards and forwards.  And that takes into account leap years, too.

Again, knowing the sun is at the centre of the system means that we can more easily explain why the planets appear to move as they do, but it doesn’t affect the fact that the appearance from earth is still of dizzying but predictable tracking and looping, and therefore of calculability. Without the knowledge we have, their achievement is even more remarkable.

Falk takes his readers through the maths and craftsmanship in building the Astrolabe (and a load of other things, too), and it is astonishing.  It’s worth saying at the outset, that you should expect to be out of your mathematical depth a fair bit (Falk admits as much), but he is friendly and helpful as we go, and keeps us standing upright when we’d otherwise have slipped. By the way, if you are near London and can make it to the Thomas à Becket exhibition at the British Museum, you’ll be able to see the very Astrolabe that Falk writes about, and marvel at its beauty.

So, why do I want you to read this, apart from its fascination? It is fascinating, by the way, and it got me outside on dark nights to star gaze with new understanding.

Because I want you to get out of this ‘Middle Ages = mud and ignorance’ mindset. And in talking to your non-Christian friends, you can start to break the silly myth that science depends on secularism, and started from an atheistic basis. Not so.  People like John of Westwyk were fellow believers like us, and even though their world was in many ways quite different to ours, we must not only admire their astonishing cleverness, but recognise that our Christian worldview is more similar than we might think. And that is a good thing.

Seb Falk begins his book with a mention of the extraordinary Derek de Solla Price. I won’t spoil the story of why he’s in there, but if there’s a spare hour in your diary, head to YouTube and watch the BBC documentary about the Antykythera Mechanism, which will blow your mind about how far advanced the Greeks were in their mathematical ability. Price is key in that story too.